When will Tesla finally bring speed limit sign recognition as a software update? Many Tesla drivers have been wanting this feature for a long time. It is often said that the competition here is far ahead of Tesla. This article collects the facts and what is known about this topic so far.

Currently, only vehicles with Autopilot 1 hardware (AP1) can read traffic signs via the front camera. They show the correct speed on the display, but only brake automatically on country roads without structurally separated directional lanes. On motorways, the speed read from signs is only shown on the display and NOT automatically reduced. Of course the displayed speed can be taken over manually by pulling the autopilot lever for a long time.

Since some software versions the signs of AP1 vehicles are still recognized by camera and shown in the display behind the steering wheel, but if you want to take over this displayed speed, the autopilot uses the speed stored in the map material. For example, in Germany, if the speed 80 km/h is detected and displayed in a motorway construction site, the vehicle accelerates to 150 km/h after a long pull on the autopilot lever, because there is no speed limit entered in the navigation maps. This is an error that should not occur.

Autopilot 1 is also only available for older Model S and Model X (vehicles with production date up to October 2016). The Autopilot 1 was developed by the company Mobileye and has been installed in the vehicles by Tesla from October 2014. In the summer of 2016, a dispute arose between Tesla and Mobileye, whereupon the partnership was terminated.

Why does the AP2 (and higher) not offer speed limit sign recognition?

Tesla has started to install the Autopilot 2 hardware from Nvidia in the vehicles after the separation of the partnership in October 2016. Tesla started to develop the autopilot software for this system itself. After initial difficulties, the AP2 and its successors AP2.5 and AP3 are now better than the AP1 in many functions. The same software is used for these three hardware platforms, and apart from the traffic control cones, there is no functional difference in the autopilot so far.

However, it should be noted that from spring 2019, newer vehicles will only have all autopilot functions with the FSD option. More about this in the article comparing the autopilot versions.

Although AP2/AP2.5 and AP3 are better than AP1 in many respects, Tesla still does not offer speed limit sign recognition. The reason for this is suspected to be a patent protection of Mobileye, which is often discussed among Tesla fans. In the meantime Mobileye has been bought by the chip manufacturer Intel. This is one of the reasons why other manufacturers already have speed sign recognition. Most of them have licensed the system of Mobileye and do not use their own development. The speed shown in the display is taken from the map material for vehicles with AP2/AP2.5 and AP3. Correspondingly often this displayed speed is wrong.

UPDATE: It does not look like a Mobileye patent is the problem. It’s only a matter of time and difficulty.

Unfortunately, this cannot be confirmed at present. In the vehicle configurator, the date was changed from “by the end of the year” to “coming later this year”: 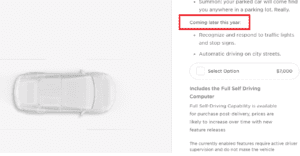 Here Tesla seems to have miscalculated too much with the announcement at the end of 2019. However, this statement only refers to stop signs and no speed limit signs anyway. In Facebook groups one often reads that Tesla buyers have been promised speed sign recognition by the end of 2019 when buying a car. But this has never been officially published in writing anywhere. It was always just talked about stop sign recognition.

Elon Musik had already stated in an interview in May 2019 that all the sub-functions required for autonomous driving (Full Self-Driving FSD) would be fully developed by the end of 2019. The date shown in the configurator matched the date mentioned. With the statement “Coming soon”, no fixed date was announced for this “feature complete” announcement. In a Twitter post in January 2020, Elon Musk confirmed that he only answered the question about the date with “soon“.

One can probably assume that “Feature complete” FSD also includes speed sign recognition. Without this, autonomous driving should not be possible. This suggests that Tesla is definitely working on it and as mentioned… … will soon … bring something like this. Maybe it is a different variant than the method used by Mobileye. Tesla could use this to circumvent patent protection. Critics claim that any camera-based detection would already violate the Mobileye patent.

What does “Feature complete” mean?

Whether the dispute between Tesla and Mobileye at the time was an additional hurdle can only be guessed. Since the announcement with a date at the end of 2019 had already been in the air since May 2019, I don’t think it will take any more years now. However, fans should dampen their expectations. By “Feature complete”, Elon Musk simply means that the car has a certain chance of driving from home to work without intervention. But that doesn’t mean that the functions work well. Musk further specified that the FSD software offers a “greater than zero” chance that your car can successfully navigate from one place to another on its own.

The original quote from the investor conference on the Q4/2019 quarterly report:

“Feature complete just means [the car] has some chance of going from your home to work without intervention. That doesn’t mean the features are working well.” Musk further specified that the FSD software will provide an “above zero” chance that your car can successfully guide itself from one place to another.

Today this is not possible, because the autopilot cannot handle traffic roundabouts, stop signs or traffic lights (it only display’s signs and lights). With “Feature complete” this should be theoretically possible, whether the car can handle the situations is another question. However, this will become better and better through further development and training of the neural networks. Only then will the next hurdle to autonomous driving be faced: regulatory approval to use such a system without driver supervision. And this decision is a different story and does not depend on Tesla, but on the authorities in the respective countries. 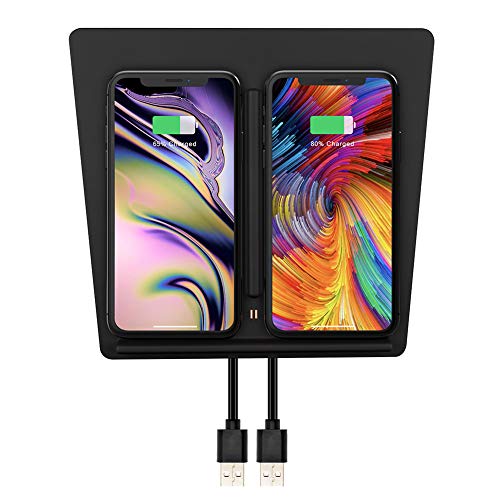