The Tesla Autopilot offers various assistance functions, including automatic lane change. Unfortunately, this often does not work as desired, or the vehicle sometimes simply aborts the maneuver for no apparent reason. The reason for this behavior is called UN/ECE r79. Behind this cryptic abbreviation is the document “UN Regulation 79“. It was published by the World Forum for Harmonization of Vehicle Regulations. In other words, by a working group of the Inland Transport Committee (ITC), a technical committee of the United Nations Economic Commission for Europe (UNECE). So far, so complicated…

What does this have to do with the Autopilot in the Tesla? Quite simply: This working group is drawing up guidelines, so-called “ECE regulations”, to create a globally uniform system of regulations for vehicle construction. The aim is to initiate and pursue measures for the worldwide harmonization or further development of technical regulations for vehicles. As you can see very well on this link, these regulations also apply to all countries in Europe.

What does that mean exactly?

Regulation 79 deals with the control of vehicles and specifies which autonomous functions of a vehicle are permitted or defines their scope. The functions and assistance systems of a vehicle are divided into the following six categories (details here on page 4): 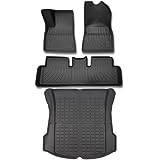 (Tip: Hold the mobile phone horizontally if the table is not fully displayed.)

Category A to D are valid for Europe. Category E exists only for the USA. The problem in Europe is: If there is no regulation for a certain vehicle function, this function is automatically NOT approved in Europe. This alone shows why the Tesla autopilot in the USA can change lanes without confirmation, whereas in Europe, we still have to set the indicators manually. Category E does not exist in Europe and the function “lane change WITHOUT confirmation” only fits to category E. This means: the Tesla masters this maneuver, but it is forbidden in all countries that have signed the UNECE agreement because it does not fit into any approved category.

Things were better before…

If you’ve been driving a Tesla with at least Autopilot Hardware 2 for a long time, you might remember that the automatic lane change had worked better before. With software version 2019.16.1 Tesla started in May 2019 to implement the new UNECE regulations. Before that, the automatic lane change in a Tesla had actually worked much better in Europe than it does today. For example, you could simply turn on your indicator and the vehicle would automatically wait until there was a large enough gap in the traffic flow. Then it changed lanes automatically and deactivated the indicator again. In my opinion, it was the best autopilot software version I ever had on my Model S. For the Model 3, however, there was only the UNECE limited software version in Europe from the beginning.

Update from 12/18/19: Apparently since software version 219.40.2.2 vehicles with AP1 in Europe are also affected by this restriction.

Tesla autopilot lane change in detail and the problem

In the following we will take a closer look at the regulations for autopilot lane change. It also becomes clear why it works so badly today. If you understand “how it ticks” and what situations it can handle, the automatic lane change can still be used with better reliability.

In the document “UN Regulation 79” different regulations are defined which also apply to automatic lane change. I will now explain their influence on the behavior of the Tesla:

This paragraph defines the entire procedure of the so-called “lane change procedure”. The third point “Lane Change Maneuver” is a part of it and is prescribed as follows:

The Lane Change Maneuver is therefore the isolated part of the whole process during which the vehicle changes lanes. Without looking at the things that happen before and after.

That reads okay so far. But unfortunately, there are some limitations in the rules which make it very difficult to use the system in reality.

The system shall provide a means of detecting that the driver is holding the
steering control and shall warn the driver in accordance with the warning
strategy below:
If, after a period of no longer than 3 seconds after the initiation of the lane
change procedure, the driver is not holding the steering control, an optical
warning signal shall be provided. This signal shall be the same as the signal
specified in paragraph 5.6.2.2.5. above.
The lane change procedure requires, and shall start immediately after, a manual
activation by the driver of the direction indicator to the intended side for the
lane change.

On the one hand, this means that the “Lane Change Procedure” begins with the setting of the indicator. However, the driver then only has 3 seconds to confirm again that he has his hands on the steering wheel by turning the steering wheel slightly. If he does not do this in time, the lane change procedure will stop. This confirmation is not necessary in the US, but thanks to the UNECE regulation it is mandatory in Europe. Another problem is timing:

The lateral movement of the vehicle towards the intended lane shall not start
earlier than 1 second after the start of the lane change procedure.

So, a timer starts running when the indicator is set and here we already lose the first second because the Autopilot is not yet allowed to start the lane change.

The lane change manoeuvre shall not be initiated before a period of 3.0 seconds
and not later than 5.0 seconds after the deliberate action of the driver described
in paragraph 5.6.4.6.2. above.

Now it’s getting really difficult. So, when the indicator is set, the timer starts. If the steering wheel is not wobbled within three seconds, the system stops. If the driver has wobbled in time, the system must not start to steer automatically towards the target roadway until at least one second after the indicator has been set. After this second, there are a further two seconds time window during which the vehicle may move sideways, but the marking line to the target lane may not be crossed during this time. Only after the third second may the front tyre cross the marking line. However, this must be done no later than five seconds after the indicator has been set, otherwise the lane change will stop.

I’m totally flabbergasted. How complicated is that! There is actually a time window of exactly two seconds until the front tire MUST cross the marking line between the lanes. Traditionally, this means that if you flash too early and the target lane is not clear, the autopilot has no chance of changing lanes in time.

But that’s not all. It gets worse:

If it wasn’t so sad, I could almost laugh now… This paragraph means quite simply: from the moment when the front tire has crossed the line, until the moment when the vehicle is completely in the target lane, no more than five seconds may pass. And this is really problematic. In reality, it always leads to a vehicle being already halfway to the target lane, but because of the five-second timeout, the lane change is aborted and the vehicle jerks back into the old lane. The driver is often totally surprised by this. If the driver does not expect that the vehicle will not finish the lane change due to the traffic situation, he will be completely surprised. This situation is also very dangerous for other road users. They are not aware that the Tesla is driving on Autopilot, and no human driver would make such a maneuver and jerkily change back into the old lane without obstacle or apparent reason.

The influence of other vehicles

The above guidelines make it really difficult for the autopilot system to function correctly in reality. What makes it even more difficult is that the following regulation also involves other road users:

In this context, complicated formulas for calculating “critical situations” are mentioned. In summary, the following is concerned: If another vehicle approached from behind in the target lane, the formula is used to calculate how far the distance must be for the lane change to be allowed. The decisive factor here is the speed difference between the other vehicle and your vehicle. The greater the difference, the greater the distance must be for the automatic lane change to take place with a Tesla.

A calculation example for this:

The own vehicle drives with 120 km/h. The other vehicle in the target lane approaches from behind at 130 km/h. According to the formula, the necessary distance for a successful lane change is at least 35.7 meters. The detailed calculation example is also shown in this video.

In summary, the automatic lane change with Tesla Autopilot takes place in the following four phases:

To use the system reasonably well, the following points should be considered:

A little tip: If I suspect that he won’t be able to change lanes, I just steer along with gentle pressure. This is because the Autopilot deactivates when I engage the steering wheel and this varies according to the situation. If the Autopilot “feels” very secure, the resistance for manual steering intervention is much higher. An example: The car automatically changes lanes to the left. I steer to the left with gentle pressure. If the Autopilot then becomes unsteady because of a vehicle approaching from behind, a light pressure on the steering wheel is enough and the Autopilot deactivates. By my steering movement I can then finish the lane change without problems and switch the autopilot on again afterwards. It needs some tact, but with a little practice, it works really well. You also learn to understand which situations the autopilot can handle and which not.

Tesla automatic lane change gets even better in Europe

In reality, it is practically impossible to use these guidelines to automatically change lanes in heavy traffic. Most road users simply do not maintain the necessary distance from the vehicle in front. But the problem does not have its cause in Tesla. The guidelines of the UN states stipulate it for Europe. It is to be hoped that this will change soon, when other vehicle manufacturers also have their problems with their assistance systems at these limitations. There are even more limitations, for example the speed with which you can drive in curves (this is explained very well in the video by Steven Peeters).

The source for this article is the excellent English video by Steven Peeters. He has also launched a petition to persuade the UNECE to relax the guidelines. Anyone wishing to vote for the petition can register online on this website.

By the way, those who are more interested in the work of this UN working group can view the minutes of the meeting and other documents here. The group meets several times a year and develops further regulations. Hopefully, in the future something more adapted to reality.